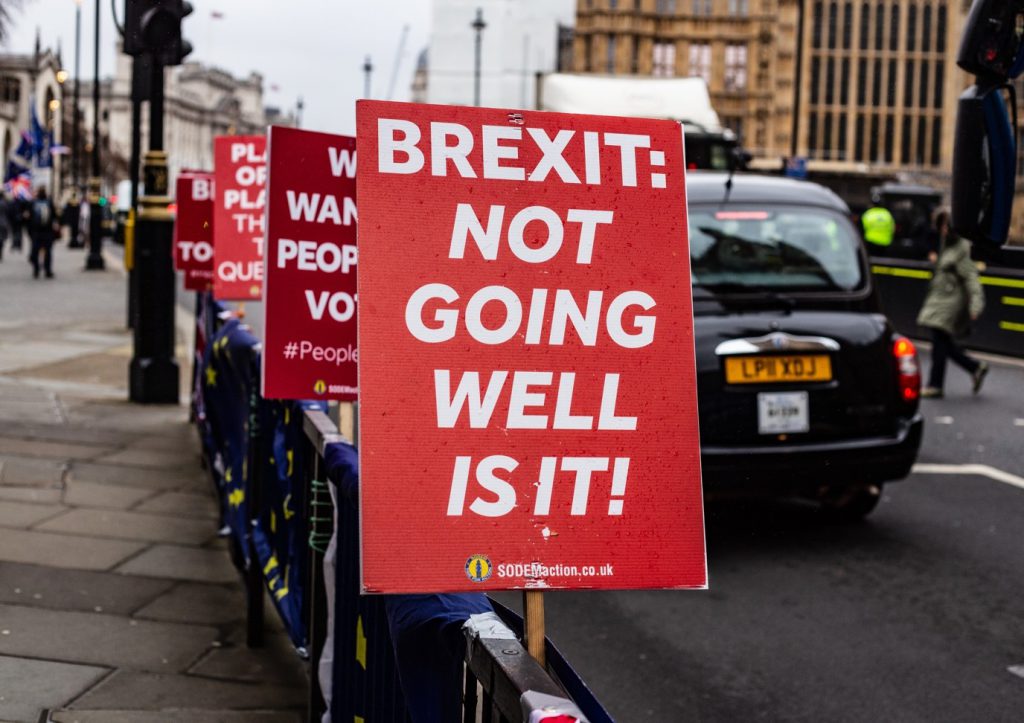 In this update, Will Martin, a Tetra Tech partner with expertise in product compliance requirements particularly in the UK, provides an update to summarise the outcome of the recent UK General Election and the outlook for the automotive sector in this next phase of Brexit negotiations.

Given the lack of a working majority of the government and increasingly hostile and rancorous nature of parliamentary proceedings, a General Election was inevitable once the prospect of a no deal exit from the EU had been averted due to the passing of the Benn Act.

The Boris Johnson Conservative Party approach to their campaign was to keep the election largely focused on one issue with their simple ‘Get Brexit Done’ slogan. The main opposition party, Labour, led by Jeremy Corbyn, attempted to broaden their campaign message with pledges to significantly increase spending on the National Health Service (NHS), welfare reform, and re-nationalising rail, energy and water and sewerage industries. Labour’s policy on Brexit was to renegotiate another withdrawal deal with the EU and then hold a national referendum on that deal.

The Liberal Democrats campaigned with a policy of immediately revoking Article 50 and cancelling Brexit should they be voted into power (a highly unlikely prospect given the number of seats they would have to gain).

The Scottish National Party (SNP) campaign was strongly pro-EU and with an anti-Brexit stance that pledged to reject the Johnson withdrawal deal and no deal option in favour of a better alternative.

The result was a landslide win for the Conservative party gaining 365 seats providing them with an effective working majority of 87.[1] This was their biggest win in a General Election since the 1980s with Margaret Thatcher’s government.

Labour conversely had their worst result since 1935, securing just 203 seats. This was primarily due to the loss of seats to the Conservatives in 2016 Brexit voting in parts of Wales and the northeast of England. Voters in those regions felt their 2016 referendum votes were not being acknowledged by the Labour party. Corbyn himself and the party’s manifesto was also seen by many as too far to the left and increasingly lacking in credibility with pledges coming thick and fast in the lead up to election day such as free broadband for all, a four-day work week, and renationalising rail and utilities companies within the first 100 days of Government.

The Scottish National Party (SNP) made huge gains in Scotland, securing 48 out of the 59 available seats in Scotland and saw within days of the election result renewed calls for a second Scottish Independence referendum to enable the predominantly remain  voting Scottish voters to remain within the EU.

The Liberal Democrats took 11.5% of the total vote share but lost one seat, bringing them to 11. Their pledge to revoke Article 50 was seen by many as a step too far, preferring instead a more democratic approach to cancelling Brexit via a second referendum.

In Northern Ireland the Democratic Unionist Party (DUP), which supported Theresa May’s government following the 2017 general election, lost two seats, whilst the anti-Brexit Social Democratic and Labour Party gained ground. Together with Sinn Féin, nationalist parties are now in the majority in N. Ireland, backing up fears that the Johnson deal to place a border down the Irish Sea with N. Ireland following EU regulation will ultimately lead to the reunification of N. Ireland and the Republic of Ireland.

The Brexit Party won no seats. The Johnson government’s hard line approach to implementing Brexit ‘come what may’ and threatening a no deal exit successfully neutered the successes seen by the Brexit Party in the May 2019 European Elections where they secured 29 European parliament seats with 31.6% of the vote share, the highest of all parties.[2]

The Johnson government’s strategy of pursuing a General Election and avoiding a second referendum went to plan, aided by a poor performing main opposition party. The remaining vote was split across Labour, Liberal Democrats, and SNP (47.6% combined) with the leave vote consolidated in the Conservative Party (43.6%). With the significant majority they have in parliament now, as well as the rebellious conservative MPs having left of their own volition or being sacked from the party in the lead-up to the General Election, the Johnson government was granted the powers to pursue whatever form of Brexit they choose, largely unchallenged.

The election result brings certainty that the UK would leave the EU on 31 January , but that was just the next step of the Brexit process. After 31 January the UK now enters into the transition period where the UK continues to operate as if it were still part of the EU whilst negotiations on the future trading relationship with the EU take place.

There was speculation following the government’s huge win that Johnson would now seek a softer, less risky Brexit. Now that support from the hard-line leave Conservatives was not essential to maintain a parliamentary majority, perhaps Johnson would soften his stance. Such notions were quickly quashed when one of Johnson’s first acts was to pass an amendment to the Withdrawal Agreement Bill to rule out any extension of the transition period beyond 2020. The transition period following the UK’s exit from the EU can be extended by mutual agreement by up to two years.

That means a trade deal between the UK and the EU will need to be in place by the end of 2020. If no trade deal is in place by then, the economic relationship would default to World Trade Organisation (WTO) terms. Given that the 2020 deadline was set assuming the UK left the EU on 31 March 2019, this shortened timeframe will be extremely challenging. Trade deals normally take several years, and the UK has limited experience or expertise in negotiating new trade deals, not having had to do so alone in the 47 years of its membership in the EU. To add further complexity and challenge, the UK is also seeking to secure a UK US trade deal in parallel.

Opening Positions on the Trade Deal

The new EU Commission President Ursula von der Leyen has said negotiating all aspects of the UK’s future relationship with the EU by the end of 2020 would be “basically impossible”[3]. What is more likely to be achieved would be a prioritised agreement on some but not all trade in goods and services and other areas of cooperation between the EU and UK. That could enable the UK to leave the EU at the end of 2020 with some form of trade agreement in place, but with further negotiations to follow in the years beyond.

In Ursula von der Leven’s speech on 8 January 2020 at London School of Economics as part of a visit to the UK to meet with Prime Minister Johnson, she summarised the dynamic of the future trading relationship, stating ‘without the free movement of people, you cannot have the free movement of capital, goods and services. Without a level playing field on environment, labour, taxation and state aid, you cannot have the highest quality access to the world’s largest single market. The more divergence there is, the more distant the partnership has to be.’[4]

On the UK’s side, Chancellor Sajid Javid has warned UK businesses that ‘there will not be alignment’ with the EU after Brexit, and firms must adjust to new regulations.[5]  This comes as extremely disappointing and alarming news to industries such as automotive, aerospace, chemicals, food and drink and pharmaceutical industries who warned the government last November about the damage moving away from EU regulation would inflict.[6]  The UK’s supply chains are intricately linked with the EU and depend on free and frictionless trade to be economically viable and to support just-in-time manufacturing models. UK businesses will still need to follow EU regulations with regard REACH, RoHS, ELV and so on, as the EU27 is the UK’s largest market. The prospect of also implementing UK variants will add significant cost, complexity and bureaucracy. BASF for example have estimated it will cost them around 75 million EUR to implement UK REACH should that come into being, which seems increasingly likely.[7]  Under Prime Minister May’s deal, there were positive signals that the UK could continue to participate in EU agencies such as ECHA and continue to apply EU REACH, but no such reassurances have been given by the Johnson government.

The rationale behind the government’s stance is that being closely aligned to EU standards will make it harder to strike trade deals with other countries such as the US. For example, to secure a trade deal with the US, the UK may be required to allow chlorine-washed chicken and beef from cattle treated with growth hormones onto the UK market from the US, both of which are currently banned under EU regulation.

The uncertainty and existential threat that has dogged the automotive industry since the 2016 election result looks set to continue into 2020 as the trade negotiations unfold. As they do, there will finally begin to be some clarity as to how the UK will continue to trade and interact with its biggest trading partner. Much damage has already been done, however. Elon Musk cited Brexit uncertainty as a key reason to choose Berlin over the UK for the location of Tesla’s first Gigafactory in Europe.[8]  Certainly, no manufacturer today in their right mind would choose to build a plant in the UK to make product primarily for the EU27 market. For the vehicle manufacturers already in the UK, the question is how long will they continue to stay? Honda have already decided to close their Swindon plant, and others such as PSA Group have stated Brexit threatens the future of its Ellesmere Port Vauxhall plant. Nissan have stated a no deal exit would make their European operations unsustainable. The long-term risk is that the UK automotive industry becomes diminished to UK brands only such as JLR, Aston Martin, Bentley and Rolls Royce.

If the government’s opening comments are anything to go by, continuing ‘business as usual’ for industry is sadly not at the top of the government’s list of priorities. As is usual with the Brexit process, we continue to wait and see what is in store.

To strengthen your product compliance strategy that can stand up to any upcoming Brexit situation, schedule a UK training on IMDS and/or REACH requirements. Details of upcoming IMDS and REACH training courses in the UK can be found here.

Will Martin, Managing Director of EPR Consulting Ltd, has collaborated with Tetra Tech as their UK-based product compliance expert since 2005, serving clients in automotive and aerospace industries with ELV/IMDS and REACH guidance and support. With Tetra Tech’s recent acquisition of WYG, Will’s collaborations with Tetra Tech will be enhanced as he continues to support us to guide clients through Brexit and other challenges.